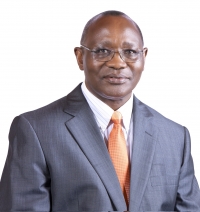 "You cannot grow the economy without carrying the stakeholders with you; we are going to focus on the growing of the various sectors that support our economy". Governor Ongwae.

Governor Ongwae attended Itierio Primary School and Kisii High School after which he joined the University of Nairobi where he graduated with a Bachelor of Arts (Hons) Degree in Economics and Government.

He joined the public service as a District Officer rising through the ranks to serve in various capacities including Immigration Officer, Management Analyst, Director of Civil Service Reform Programme, Permanent Secretary/Director of Personnel Management(DPM) in the Office of the President, Secretary/CEO for the Teachers Service Commission and Permanent Secretary in the Ministry of Agriculture.

Governor Ongwae served as a member of the Governing Board of Eastern and Southern African Management Institute (ESAMI) – Arusha, Tanzania for many years and Vice-President (East African Region) of the African Association for Public Administration and Management (AAPAM), which is an International African Management body supported by over twenty (20) African Governments.

Upon retirement in December 2005, Governor James Ongwae continued participating actively in shaping national leadership, development and political agenda. He vied for the Kitutu Chache parliamentary seat during the 2007 and in 2010 he actively participated in campaigning for the Kenya Constitution 2010.

He worked for the Rt. Hon. Raila Odinga’s Presidential Secretariat in 2012 as the Chief Campaign Manager before leaving to run for the Kisii County gubernatorial seat during the March 3, 2013 general elections, which he won with a landslide.

H.E. Governor James Ongwae was sworn to office on 27 March 2013, thus becoming the first Governor of Kisii County under the new constitution dispensation.

Governor James Ongwae believes that you cannot grow the economy without carrying the stakeholders with you. In his leadership, he has focused on developing institutional frameworks that would lay a strong foundation for a prosperous Kisii County.

These awards were given by the then Heads of State for outstanding work to the Nation.

Tweet
More in this category: « County Secretary Deputy Governor »
back to top